The Bobcat is a type of feline known as the Lynx. It is about two times larger that the typical domestic cat. They range in size from 11 pounds to 30 pounds with the males being larger than the females. They have black markings on the face and on the tufts of the ears. The tail has bands of black around it at the end. They offer a brownish or tan coloring. Many of them also have a reddish tint to them. The underside of the body is white.

The body of the Bobcat is one that is very flexible as well as strong. They are able to move at very fast speeds. They also have the ability to leap very high. The tail is short and stubby compared to other cats.

You will find the Bobcat living all over the areas of North America. They live in a variety of locations including the plains, woodlands, thick forests, and grasslands. They seem to have the ability to move from one type of habitat to the next should they need to in order to survive.

They look for regions that offer them cover, that offer them places to protect their young, and where they can find enough animals to eat. For the females the choice of habitat is vital to the survival of her young.

The fact that the Bobcat likes to hide gives it the advantage over ambushing its prey. It is this very behavior though that has humans very afraid of it. They don’t like the idea of one lurking in the brush or the rocks around their homes or hiking trails.

The Bobcat is a loner and it can be very aggressive when it feels threatened. They have a wide home range that spans many square miles. They don’t like others to be in that region and they will fight to protect it. Overlapping of territories can occur but mainly only with the opposite gender. 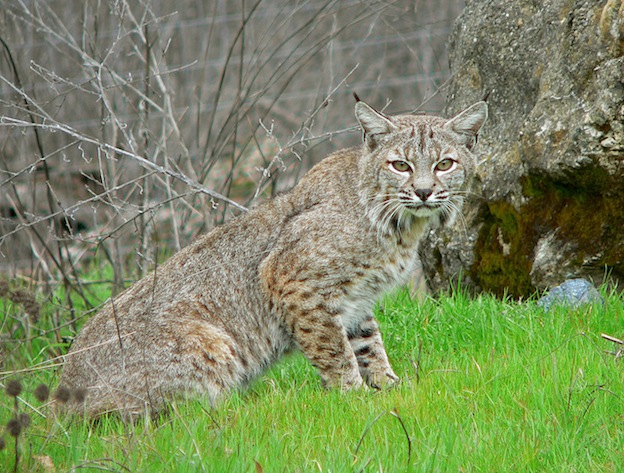 The diet of the Bobcat varies depending on where it resides. Common foods include rodents, birds, reptiles, and the young of many larger animals such as deer. They tend to consume many rabbits and raccoons. They love water and will even consume beavers and other animals in such a location.

Mating season varies for the Bobcat depending on the areas where it lives. The females leave a very strong odor that the males follow. They can fight each other aggressively in order to be one she will mate with. There are many yowls and screeches that occur as these bobcats try to find each other to mate.

The result of such efforts is often a litter of two or four young that arrive two months later. The mother has to find a place where she can protect her young from predators and the weather. They are helpless at birth and won’t open their eyes for about ten days. The average lifespan in the wild for a  Bobcat is 10 to 12 years. They can live up to 30 years in captivity.

There are many humans that find the Bobcat to be a threat. They don’t want to risk these animals harming humans or their livestock. In some areas it is still legal to hunt them. Even in areas where it isn’t’ though the process continues. They aren’t in danger of extinction at this point in time. However, many feel that if efforts aren’t taken to preserve there natural habitat there is a risk of their numbers plummeting to very low rates in the near future.