The way in which hunting is done by the Lion is very different than for other felines. They hunt as a group instead of singular. They are able to create strategic plans and locations so that they have their target prey surrounded. This increases the chance of them being able to get their prey successfully. It also allows them to take down very large prey. Since there are many to feed it makes sense to get something that offers lots of meat.

The female Lioness of the prides will do the majority of the hunting. Typically a male will only hunt on his own if he is looking to create his own territory. The males are believed to have a hard time hiding from prey. This is due to their manes which don’t seem to remain well hidden like the rest of their body can. The mane can also increase the heat of the body when they are chasing prey. This can cause them to use up a great deal of energy.

Watching the coordinated efforts of the female Lions during hunting is very interesting. They all know their role and the position of the animal to take. Just like players on a football field they each have a role to complete. If one of them doesn’t do it correctly then it can result in the prey escaping. It can also result in one of the Lions being injured or killed.

Since the Lion can only go at fast speeds for a very short period of time, accuracy is very important. They need to be able to pounce and take down the prey right away. This is a very calculated process. It isn’t fully understood how they are able to communicate just which of the animals around will be the prey.

The males are often very good at waiting and watching for the kill to take place. When they are worried about getting enough to eat they will linger in the vicinity of the hunting party. As soon as they take down a kill the dominant male of the pride can march in there to eat.

There is a hierarchy among the Lion pride that determines the eating order. They eat first. The females that are involved with the hunt are the next to eat. They will consume some of it at the site of the killing. Experts believe this eating first ritual is to ensure the leadership of the pride. If they don’t then all of them can end up lacking when it comes to getting enough food. 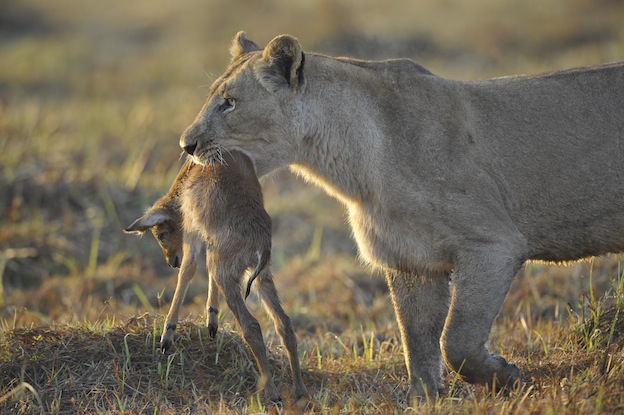 A lioness with new-born antelope prey

The cubs are often the last to eat and even they have a hierarchy among them. Sometimes males share the food with cubs and females have to wait. When males hunt alone do not share their prey.

The larger prey that the Lion eats include Wildebeest, Zebra, Impala, Buffalo, and Deer. What they have access to often depends on the habitat where they reside. They occasionally will hunt the Giraffe but that can proof to be very dangerous. The Lion is going to look for young, for weak, and even for the elderly that they can take down without much risk of being injured in the process. The size of the prey they take down can range from 420 pounds to 1,200 pounds.