The male Lynx are ready for mating when they are about 2 ½ to 3 years of age. Females are ready around one year of age. The males go seeking for the females and will encourage them to take part in mating with them. The females can mate with more than one male during a given mating season.

Late winter is when the Lynx will take part in the mating process. The females are able to give birth once a year. The young are born approximately 70 days after mating takes place. During this period of time the mother will create a den where the young can be born. She wants them to be well protected from the elements as well as from predators.

A litter can be from one to four kits that will be dependent upon her for their care. They will use her body for warmth and consume milk that she produces. The females can end up mating with several males during a span of several days.

They do have a full body of hair on them at birth but they can’t see yet. It will take them about 10 days before they are able to open their eyes. Instinctively though they know to go to the mother’s body to feed from the milk she produces. They will also curly up with each other so that they can stay warm.

When they are about only one month of age they will be introduced to meat even if they are drinking milk. The young are very playful with each other and that helps them to develop strength and strategies for hunting that they will need later on.

The young Lynx will live with their mother for about 9 months. Then they have to spread out and make their own way in the wild. Sometimes the mother will simply leave them and they have to fend for themselves. They may stay with their siblings for a few months before they start to move further and further away from each other.

They average life span of the Lynx in the wild is 13-15 years. However, the young do have to be very concerned about predators. The older they become though the less likely that risk is for them. Even so, there is a high mortality rate of the young. 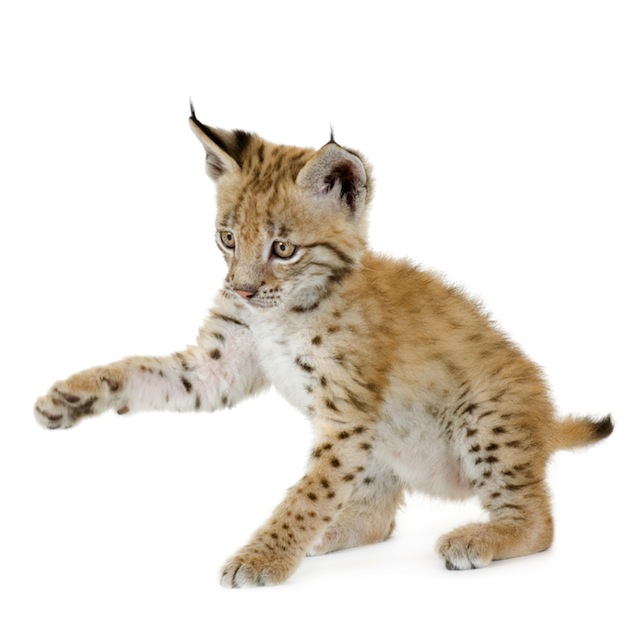 In addition to problems with predators the young Lynx has other concerns. They may starve if they don’t have adequate skills for hunting. When there are plenty of food sources though there is less of a risk for them to become prey. There is also less of a chance that they won’t find enough food for their own survival.

Problems with disease and parasites are common among the Lynx. These elements can be found in their natural habitat. The fact that they can go many miles per day looking for food also means they have a high opportunity to infect each other when they have been plagued by some type of disease or infected with parasites.

The fact that roads continue to be build in areas where the Lynx lives means that there are problems for them to survive because of it. They may have to cause busy roads to get to food sources. As a result many of them get killed when they are hit by cars frequenting these stretches of the road. Not all of them die but the injuries that are sustained can make it hard for them to adequately hunt for food.