The body of the Lynx is very interesting. The fact that some of them have such short tails gets attention. This is due to the fact that other similarly designed animals have a tail that is very long. The body is a golden brown coloring with black areas on it. They also have white along the front and under the chin. Their eyes are very shiny in the dark and that is where their name comes from. Lynx means to shine in the Greek language.

They are able to walk on the snow due to the padding on the bottom of the feet. This is key in helping them to be able to conserve energy as they move around their environment. These feet are extremely huge and that also helps to keep them balanced.

They rely on their keen sense of hearing to help them listen for danger as well as to find prey for them to feed upon.

The Lynx has very long legs and they also have heavy paws. The fact that they are able to move effortlessly on top of snow and ice is very surprising when you look at this part of their bodies. The strong legs make it possible for them to take down prey that can be up to four times larger than they are.

They have 28 teeth in their mouths that are attached to very powerful jaws. They are able to stab these teeth deep into their prey during hunting efforts. The size of the Lynx can vary depending on the location where they are found. Some of them are about 10 pounds while others can be more than 65 pounds. They aren’t nearly as fast as other types of felines and many believe that is due to their shorter tail. They simply aren’t able to keep their balance at faster speeds.

The Lynx is able to leap about 10 feet high and that can help it in a variety of situations. This movement can assist them when it come to getting their prey. It can also help them to avoid becoming a source of food for various types of predators out there. They make such movements seem effortless. They are able to leap due to the mechanism of their spine. 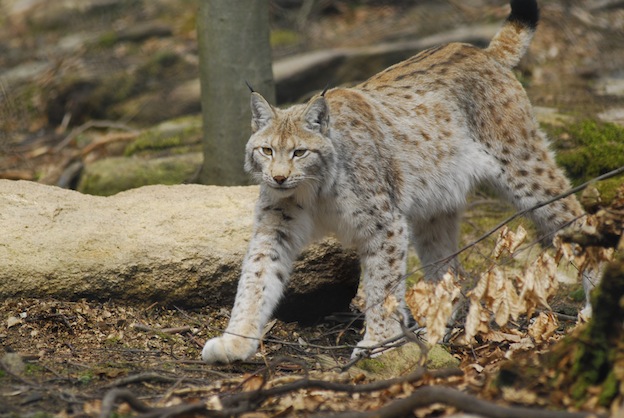 There continues to be an interest in the anatomy of the Lynx. The fact that they are highly adaptable animals is very intriguing to researchers. Part of what they are interested in is the evolution process for the Lynx. They want to find out what all has occurred in the past to allow them to continue adapting to new environments.

Many experts believe that in the past the Lynx was a much larger animal than it is today. If this is true then there has to have been many interesting elements that occurred over the course of millions of years for them to change in size. It could have been due to the risk of other large animals diminishing as so many of them didn’t survive. It may have been so they could move faster and be able to survive on less food.

In spite of the drastic drops in numbers due to human activities, there is still hope that the Lynx will survive. As a whole they are classified as being Least concern and one species is critically endangered at this point (2013). Some of the species though are at a more critical status than others. There is hope that if we stop taking away their environment and the food sources they may be able to adapt enough due to their anatomy to be able to increase in population and to be around for millions more years.