Known as the most endangered feline in the world, the Iberian Lynx is one worth taking a close look at. Like all Lynx it features a short tail and tuft ears. It also has the tuft under the chin that resembles a human beard. The markings on the tan or grayish fur are very distinct. They are black in color and they have shorter hair than the other species of Lynx.

They range in size from 28 pounds to 60 pounds, with the males typically being much larger than the females.

The whiskers of the Iberian Lynx are very sensitive and they help this animal to be able to find prey. They have excellent hearing that also helps them to find food. Their fur helps to regulate their body temperature and their paws helps them to move silently across the snow.

There is only one known location where they Iberian Lynx is living. That is the Iberian Peninsula in Southern Europe. They are able to live in the mountain terrain and only some of them live in lowland forests. They have a body that is designed for versatility and to handle the cold climate. The elements can often bring in harsh snowstorms to this region.

The Iberian Lynx is very territorial and they have a span of about 10 square miles that they cover. When food sources are low though they will venture long distances. Fighting and conflicts will occur due to the movements and the interactions among them with those movements.

There are many different types of food for the Iberian Lynx to consider. They include rodents, reptiles, and amphibians. They also consume large amounts of rabbits and birds. They tend to stick to these small sized prey but there are times when they will take down small deer, ducks, and fox. 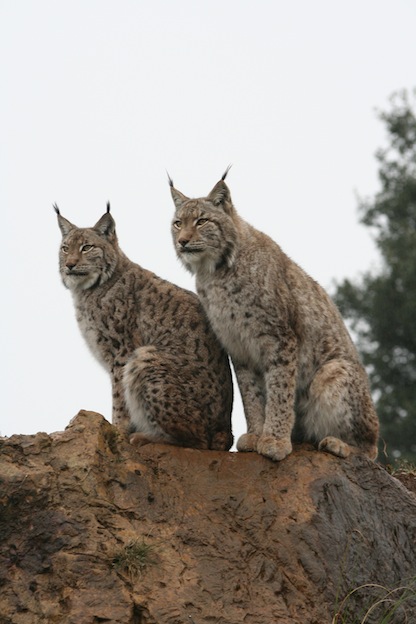 The females are the ones that initiate mating, leaving their home range to find males. Most of the time the young are born in either March or April. There are usually two or three kittens per litter. They are kept in a den for several months to help them survive. As they learn to venture out they are able to start picking up a variety of skills. They are mostly independent around 10 months of age. However, they will continue staying with their mother until they are about two years of age. The advantage of this is that they are able to hunt in her territory.

The mortality rate is very high among the Iberian Lynx. It is usually at the hands of each other though. Experts aren’t sure why these young animals get so aggressive about the time they are a couple of months old. It is believed this is to develop a type of hierarchy. Even when there is plenty of food this can be taking place. The aggressive behavior can last about one or two months and then it will decrease.

The Iberian Lynx is considered to be critically endangered at this time. Due to that fact many people are involved in conservation efforts for them. They are pushing the government to enforce laws to make it illegal to harm them. They also want to work harder to educate people about how important these animals are for the natural balance in that ecosystem. Protecting the land where they live is a vital part of helping them to increase in population.