It is believed that Africa is the native home of the Cheetah. However, after the Miocene epoch they were able to move into Asia. It is likely that they migrated in an effort to find sources of food. Some small regions in Iran, Jordan and Israel are also home to the Cheetah. There are conservation efforts in place to get more of them back into the various regions of India. However, it can be difficult to get them ready for such a transformation.

It is believed that they have been completely wiped out of India since 1947. However, with conservation efforts in place it is likely they could thrive there now. There have been numerous studies and it wouldn’t cause problems for the populations of animals there that would be prey to the Cheetah.

The Cheetah is actually a very shy creature and that means it is often well hidden. They blend in well in their surroundings. They have very small teeth (compared with other felines) so they aren’t equipped to really fight off predators. Hiding is what they do best to remain hidden from predators. They also will run with lightening fast speed if they feel they have been detected.

The Serengeti National Park in Africa is home to many of the remaining Cheetahs in the wild. There are plenty of people that travel to this country for an amazing adventure. They go exploring the various animals through a guided safari. It can help people to become more aware of these animals and the need they have for their own survival.

The populations around the Algeria and Zimbabwe seem to have dwindling numbers of the Cheetah remaining . A large amount of the habitat there has been removed and that is a reason why it is hard for them to find food. 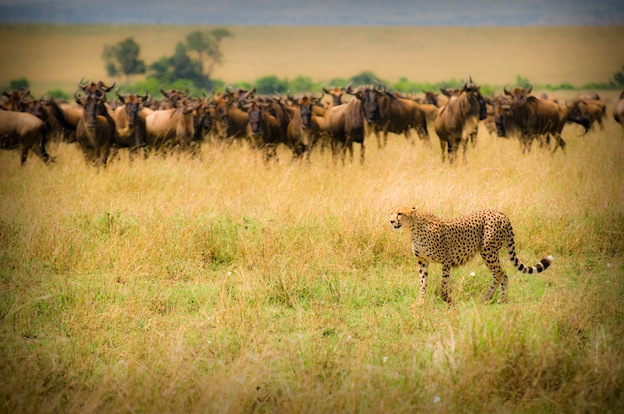 Cheetah hunting in in the African savannah

There are many different types of habitat that the Cheetah is know to live in. They can be found living where it is extremely warm in the semidesert. They are also known to live in the prairies and savannas where it is wet and swampy. They can live in the dense forests as well as in the mountain terrains.

Typically they are able to survive anywhere that offers them the ability to find other animals that they can feed upon. When their availability of animals for food gets scarce that is when a given habitat becomes one that is very hard for them to survive in. Since they aren’t highly adaptable to environmental changes this continues to be a huge obstacle for them to deal with as they struggle to avoid extinction.

Conservation efforts continue to try to get the Cheetah as much protection as possible. They want to have large areas of land offered as locations for them to roam free without risk of being killed. They also want to see the animals in better conditions while in captivity. That way they can be one day released into the wild.