The social structure of the Lion is very interesting to observe. Groups of Lions living together are called prides. There is typically five or six females that live in it plus their cubs. There may only be one male or there can be up to two of them. Only one will be the dominant male though and the one that has the right to mate with the females. It seems that every member of the pride has a role to play. That role can shift though depending on their needs and the size of the pride.

Usually all of the adults in the pride will work as a team to protect each other and the young from other predators. However, there is often a hierarchy here that determines who will be dominant in that fight to protect them. Some of the Lions may cover the outer perimeter with others remaining well protected inside of it.

There can be brutal battles between entire prides of Lions over territory. When they have locations that overlap there may be a fight for who gets to keep it. Such battles are becoming more frequent now that humans are taking away so much of the area that the Lions once called their home.

The social structure of the Lion also affects the eating patterns for them. When a kill is made the females involved with it will eat first. What is left has to go through the hierarchy of the pride.

There are some dynamics that can take place in the social structure of the Lion that we don’t yet understand. They have to take on a nomadic existence and that can be very difficult for them to survive.

There are times when females are also run off from a pride and the reason for that isn’t understood. She will have a very hard time surviving too. They won’t be readily accepted into another pride. The males can take over other prides if the challenge the dominant male and win. 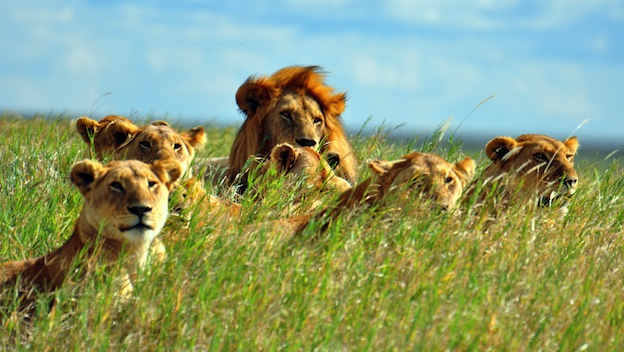 A pride of lions in Serengeti National Park, Tanzania

It is believed that both males and females can be pushed out of a pride if they are no longer able to complete their role. For example if a female isn’t able to hunt any more due to an injury or if a male is too old to be able to defend the pride. Such changes in dynamics works to ensure those that are strong and healthy are able to continue to thrive.

There are some times when it seems that larger sized prides may push out members due to overpopulation. They may have experienced a surge in the number of female offspring born and surviving for example. Then some of the younger ones that are fully mature will have to leave the pride.

There is plenty of complexity when it comes to the social structure of the Lion. A great deal of it we still don’t understand and so more research needs to be done on the subject. The desire and need for social interaction is very great among the Lions. This is so different from other felines that prefer to be alone.

When Lions are placed into captivity there needs to be at least two of them. This allows for their social needs to be met. They will develop a hierarchy there within that confined area as well. It can take some time for new Lions to be introduced and accepting of each other.