Asia, Africa, and Siberia are the homes of the Leopard. Very small numbers of them are found in China and Malaysia. They used to be very large in number in those areas but that is where they have been heavily hunted. They are able to live both in the rainforest and in desert areas. As long as they have access to sources of food they are able to adapt to different locations.

Studies show that the coloring of the Leopard can vary depending on the area where it lives. This is a type of advantage that allows them to benefit the most from any given environment. For example the Leopards living in the desert are several shades lighter than those that reside in the grassland areas.

Part of what makes the movements of the Leopard so versatile in different habitat locations is the design of the pads of their paws. They allow them to live in regions that are extremely hot, have mild temperatures, and even those that are quite frigid. They also have a non skid design so they can move around on snow, ice, and in muddy areas. Those are also advantages that make it possible for them to have an edge over their prey.

The one animal that the Leopard has to keep a careful watch on in their habitat is the Warthog. They have been know to attack frequently for their own protection. The female Warthogs are extremely aggressive when they have young to care for. They can easily take on a Leopard but these felines instinctively know to keep their distance as much as possible.

The Leopard is a loner and they like to have large spans of area that they can use to look for food. They can become very aggressive when there are others lurking in common areas. Males can become very aggressive to others that may be just moving through to find their own habitat. That makes it very risky for the young males that have just left their mothers to find their own place. 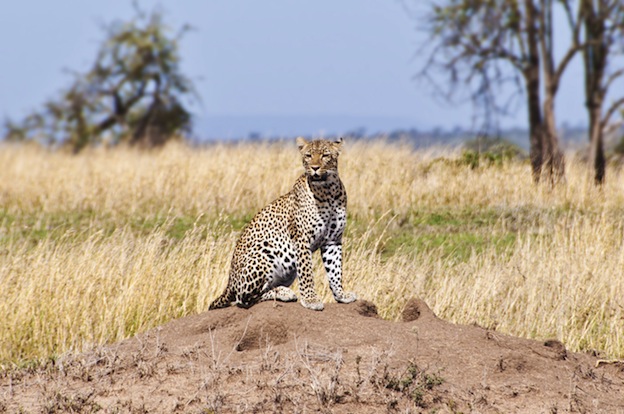 Females seem to be more receptive to the overlapping, but that is only true if they have enough food to eat. They often allow their daughters to remain in the area for many years. Even though they don’t hunt together her offspring will recognize here. In fact, they sometimes use the same dens and caves where they were living as a cub when they have their own young.

The area where the Leopard is free to roam continues to get smaller and smaller all the time. This is due to humans clearing out such areas for their own use. They need to keep in mind that by doing so they are upsetting the balance of nature. It can have a rippling affect too that will also have a negative impact on them in the end.

Since the Leopard is able to adapt to just about any environment, that can include one where they are running into humans. They may retreat from people but they have also been known to attack and eat them. Most experts believe that the problems humans have with Leopards in the same territory will only get worse if we don’t stop destroying their natural habitat.