The Leopard doesn’t pass up a single opportunity when it comes to hunting. Many experts believe this accounts for why they have been able to survive through millions of years as well as environmental changes. Hunting usually takes place from dusk until sunrise. However, they may be seen out looking for food during the daylight hours. When that occurs it is often an indicator that food is becoming scarce in the habitat.

They are silent stalkers and may wait for long periods of time before they pounce on something that comes along. They are able to identify behaviors of animals though such as when they will be moving and when they will be coming to water sources for a drink. They use those movements to increase their chances of being successful with the hunt. 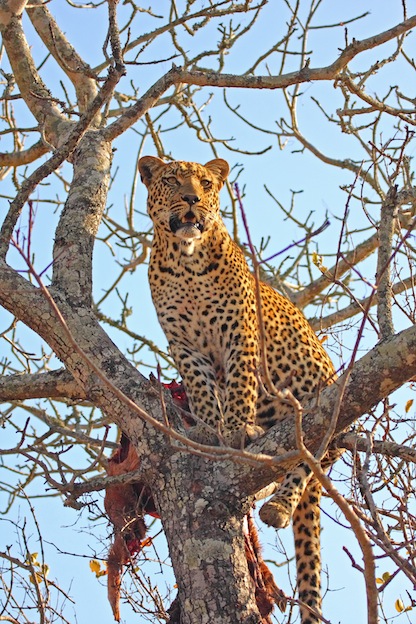 Leopard in a tree with kill in Sabi Sands Reserve

While the Leopard is mainly a meat eater, it will surprise you to learn about some of the things they will consume for survival. This includes dung beetles, rodents, small monkeys, and even fish. They can take down prey that is up to three times larger than they are. It only takes one swift bite to the neck and they will be successful. They often consume Antelope and the Impala.

When a Leopard has made a successful kill, it will do all it can to protect that food source from other predators. One way it is able to do so it by climbing up a tree with that carcass in its powerful jaws. They are the only known feline that takes their food to this extreme in order to protect it. Others simply hide it or bury it so they can return later on to eat it. The Leopard can lose food quickly to Hyenas and Lions if they don’t take efforts to protect it.

While the Leopard is mainly a night time hunter, they have been known to be out during the day. After carefully observing such behaviors it is believed that they may do so to avoid hunting during the same period of time as other felines that live in the surrounding habitat.

If that is true, then this shows the Leopard has the skills to problem solve. It would also explain some of the changes in their behavior that have been noted from one environment compared with others. They seem to be motivated and driven to do whatever it takes for survival. A key element of that is being able to get the foods they need. 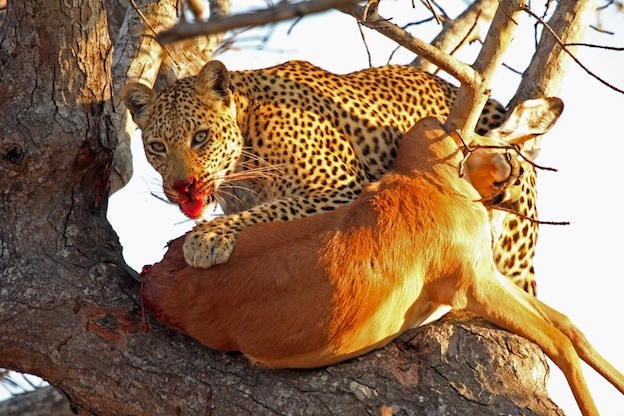 Leopard with their newly captured prey

With so many people moving into the regions where the Leopard lives, it has created some tense situations. There are farmers and ranchers that settle into such areas and then they start to miss animals they are raising. The Leopard is coming into these areas and feeding on what they can.

The Leopard had a powerful body that makes it a natural swimmer. They are often found in the water to cool off. However, they can use it as a means to chase prey too. They can do well in the water and many other animals can’t. They can drown them and then consume them easily that way. They can also find food including crab and fish in the water.

Is it true that the Leopard will feed on humans? There have bee documented instances of this occurring. They may do it out of fear for their own protection or perhaps when food sources are hard to find. They can get a taste for humans though and then they have to be destroyed as they are a risk to all of the villagers in that area.