As with all felines there is plenty of strength to be found. These animals may look very gentle and lazy when they are resting but when they are awake it is a different story. They usually move around at a slow pace so that they are able to conserve energy. Yet you should never underestimate the Leopard because in an instant it can move with lightening quick speed.

The Leopard has shorter legs than most felines but they are more powerful. In fact, they are able to run at a top speed of 36 miles per hour for short periods of time due to their powerful legs. They can leap about 20 feet forward and about 10 feet in the air. This type of agility helps them with being able to hunt as well as to escape any danger that they detect around them.

Part of the reason that they are able to move so easily and so quickly is due to the strong muscles in their neck and in their shoulders. They have a very long tail that also offers them a great deal of help with staying balanced. The overall size of this animal often depends on the region where it lives.

Their paws make it possible for the Leopard to adapt to a variety of different terrain. They can also move with ease when the climate is calm and serene or when there are piles of snow on the ground. The versatility of their bodies allows them to adjust to what is offered in their environment. Many experts believe this part of their anatomy has allows them to survive for millions of years. 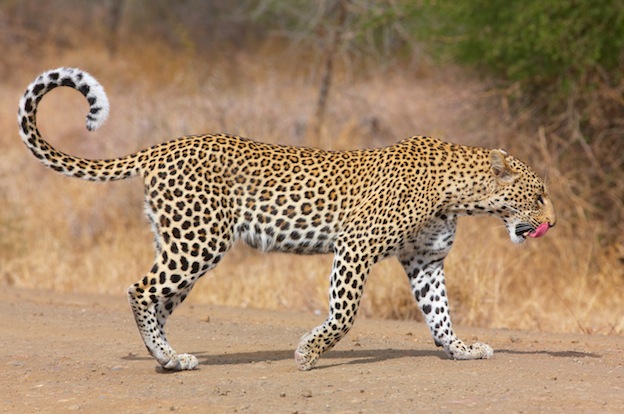 The power of their bodies also allows them to be naturally good at swimming. When it is too hot for them they can cool off. However, they can also use the water to help them as a means of capturing their prey.

They also feature a larger skull than the other members of this classification. Those jaws allow them to be able to hunt for animals much larger than they are with success. In fact, they can even climb up a tree with a carcass in its jaws. It is believed that the sharp teeth of the Leopard is powerful enough for them to pierce all the way through the neck of their prey.

These animals are excellent climbers due to the way their body is formed. They often spend large amounts of time during the day relaxing in the trees where there is shade. They can also take their prey into the trees when they need to so that other animals won’t scavenge it.

Imagine them having the strength to take their prey – which can be several times their own size – and carry it up the tree to find a branch that is high enough and strong enough for it to be safe. They rely on their balance to help them do this. Such an ability though helps to ensure they have their food they need to survive.

The overall anatomy of the Leopard is its weapon for survival. Should they become injured due to predators or when they are taking own prey it can be very hard for them to recover. They may not be able to hunt for enough food for them to continue to survive. Some Leopards have escaped danger from poaches only to end up starving for such reasons.