Jaguars mainly live a solitary live. The times when they do come into contact with each other are often mating and when they have young to care for. The female Jaguar is ready for mating when she is about 2 years of age. For the males it is later – usually around 3 or 4 years of age.

For this particular feline, mating can take place during any time of the year. They seem to have some internal methods of population control though. Studies indicate that when they Jaguar is under a great deal of stress or when they aren’t able to find adequate supplies of food then they won’t mate.

When circumstances are good though the females can enter a cycle of estrus for about 37 days. They will be in estrus anywhere from 6 days to 17 days during that period of time. During this period of time the females will release stronger odors in their urine. They will also take part in a variety of vocalizations that will help the males to locate them.

The males sometimes have to fight with each other for the right to mate with a female. Their paths can cross much more than usual when they are being called by females. The stronger and more powerful male will be the one that gets to mate.  Then the couple will go their separate ways.

The female can give birth to a litter of up to four cubs about 100 days later. Most of the time though a litter will consist of two very small and vulnerable cubs. The mother will do all she can to protect her young. The young will drink only the milk from their mother for the first three months of life. However, it will be a full six months before they venture outside of the protective den.

The mother will begin bringing meat back to the den for them when they are a few months old. She may have to leave them alone for long periods of time while she hunts. She will even fight with males that come around. They are going to try to kill her offspring in an effort to get her to mate again soon. When they do come out of the den they will help her to find food.

They will continue to hunt and live with her until they are a couple of years old. At that point in time they will go to find their own territory. The males usually will leave first and they will venture the furthest. The females may stay very close to the home range of their mother. 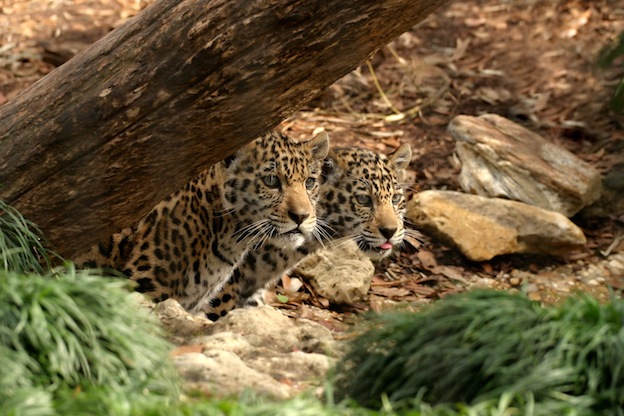 Many experts believe that the males move a long distance from their mother and siblings as a way of nature preventing inbreeding from occurring. When the population of the Jaguar is eliminated in a given area this can become a concern. Inbreeding can result in a very poor genetic makeup for future generations.

Due to high levels of stress, there is often a very low rate of reproduction in captivity. This makes it hard for conservation programs in this area to help with increasing the population. Research has been conducted though to help increase the level of the environment. Hopefully by making it as realistic to their natural environment as possible those levels of stress can be reduced.

The average life span of the Jaguar in the wild is 15 years. This is one of the highest rates of all felines. They are able to live up to 20 years with the right conditions in captivity.