The Jaguar hunts alone and uses the element of surprise to help it do so. They will lie in waiting for their prey and then ambush it. With a body that moves very quickly, powerful jaws, and sharp teeth they are often victorious. Since it does take a great deal of energy for them to be able to hunt they need to be very calculated. Exerting energy but losing the prey can result in weakness and starvation if they aren’t careful.

They also have to be careful with some of the larger prey that they take down. It only takes one wrong movement and they can end up injured or killed. For example if they get kicked by a powerful animal that is struggling for its own life. When that occurs the Jaguar may end up with the inability to hunt and then they will start. That is why they rely on their agility to help them. It is also why they will often consume smaller prey to avoid such risks.

The killing methods of the Jaguar are somewhat different than that of other felines. Rather than biting the neck and the jugular vein they will bite at the base of the neck between the ears. They have powerful enough teeth that they can pierce right through to the brain.

Some of the foods that they consume include deer, sloths, tapirs, caimans, and monkeys. Among the smaller ones are rodents, reptiles, frogs, and fish. They also consume eggs of various animals that they may come across. The Jaguar is a very opportunistic feeder so they will consume just about anything they come find.

They have excellent vision at nigh which is when they do lots of hunting. However, they also hunt during the day. They are more active than other species of felines that will primarily rest during the daylight hours. It is believed that they can feed on about 87 different species of animals. However, since it is hard to observe them in the wild it is possible that they consume many more.

To prevent the loss of their prey from other animals, they will often take larger prey to secluded areas. They will gorge on it by eating very rapidly. 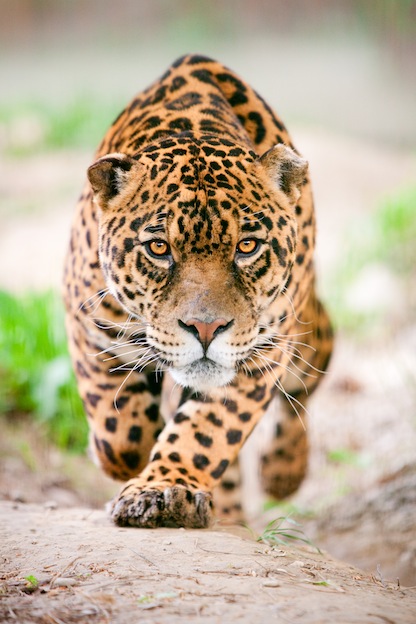 They have a very interesting method of consuming prey. They will start at the neck and then move to the chest. Most other felines start at the midsection of their prey. They will move to the shoulders before consuming the midsection. The average adult Jaguar can consume up to 50 pounds of meat after periods of time when they haven’t had enough. They typically though will consume less pounds a day if they are able to consistently find food.

The problems that Jaguars develop with parasites including hookworms are believed to be associated with their diet. There isn’t much that can be done though to help resolve such a problem. Unfortunately those that are afflicted by them can become very ill and die. Their body can be deprived of essential nutrients it needs due to the parasites. Most of the time the presence of such problems among the Jaguar population is found in their feces.

The fact that that such problems rarely occur in regards to those in captivity also is a strong indicator that it has to do with their diet. Yet it is hard to pinpoint just what it is in the wild that they eat that can cause such serious health problems for them.