The habitat and distribution of the cougar spans a greater distance than for any of the other wild cats. It is a native of the Americas and the distance is extraordinary. They are centralized in the Western Hemisphere and they are found across the Yukon and into areas of Canada. They are also found in the Andes of South America. Since they are highly adaptable they are able survive in a variety of different types of habitats.

Some of them even live in the swamplands. As long as the area where they live offers them enough access to hoofed animals for them to consume then they will be able to survive there. The bottoms of the feet of a Cougar allows it to explore various terrain without any difficulties.

The home range of a Cougar can easily span from 25 to 400 miles in some areas. This is a huge problem as these animals need the ability to be able to move about and to find food. They tend to get involved with humans when land is being taken away from them for homes, farms, and ranches to be established. Finding a balance for them and humans has proven to be very difficult.

The Cougar will very heavily mark territory with feces and urine. The young males that leave their mothers are very vulnerable as they try to find their own habitat out there in the wild. They can end up being the victims of other males that feel threatened by the younger ones. Even if those young males are simply passing through to find their own place it could prove to be fatal for them.

The Cougar lives in areas where it can easily blend into the surroundings. They can be found on the plains with areas of brush where they can lie and wait for their prey. They also live in mountain terrain where they can easily move around and look for food. They may hide on rock ledges until they see prey coming along. They are going to pounce on them from behind their hidden locations or from above and that means they often get the prey down in that environment without any problems. 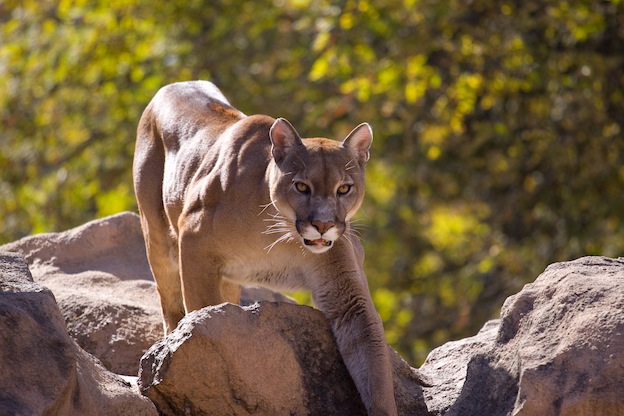 Mountain Lion in their natural habitat

They are extremely territorial and they don’t like to have others in their home range. They like to have a very wide area that they can go exploring to look for food. As their home range ends up being reduced due to the efforts of humans, they are going to fight even more aggressively for the areas that do remain.

The young may find it very hard to identify a new location where they will live after they leave their mother. They try to find areas that other Cougars have abandoned or that one has died in. They may end up on the outer rim of the habitat and that means they will have a harder time surviving. When they get bigger and stronger they may compete with other males for better territory.

The Cougar has a huge problem in the wild with various types of disease and parasites. Due to the fact that these animals can move many miles every single day looking for food they will have a good chance of spreading it to others. There have been entire areas of the Cougar wiped out due to such epidemics. Research shows that there is a type of virus among the Cougar as well as some other felines that affects them in the same way that AIDS affects humans. This can result in them becoming disabled and then they starve because they no longer have the strength of ability to hunt as they did before.