The Cougar has a body that is designed to give it the advantage when it comes to hunting. They are very patient animals when it comes to stalking and then ambushing their prey. When they catch a large animal, may wait for several days before they are able to take an opportunity to find food. They may go through cycles of feast and famine depending on what is readily available for them to eat.

They tend to hide in the underbrush or on rocky ledges. That way they have the element of surprise on their side when it comes to taking down their prey. Finding food can be very hard at times for the Cougar. They have to compete with a handful of other predators for the same types of food. This includes the American Black Bear, Jaguar, Grey Wolf, and Grizzly Bear. Those other predators will change depending on the habitat of the Cougar.

There are plenty of different types of food that the Cougar consumes. It depends on the area where these animals live though. Their diet can consist of deer, elk, moose, and big horn sheep. They are capable of taking down animals that are many times their own size. They will eat just about any hoofed animal that they cross paths with.

The fact that the Cougar is also known to kill dogs, cattle, sheep, and horses causes serious problems with it and humans. Most experts believe that the killing of these animals is due to the fact that humans continue to move into the areas where the Cougar needs to be able to freely hunt for its own food.

When a Cougar takes down a large kill it will drag it to a location where it can be hidden from other predators. They will return to feed on that prey day after day until it has been completely depleted. They are very conscious about the need to hide their food sources. Sometimes they will drag it a 1,000 feet.

It can be very difficult for a mother of hungry kittens to be able to find enough food for all of them to survive. When there is plenty to eat they have a better chance of thriving. If there isn’t much food she has to eat first to have strength to continue hunting. When the young are about six months of age they get to start going on hunts with her. 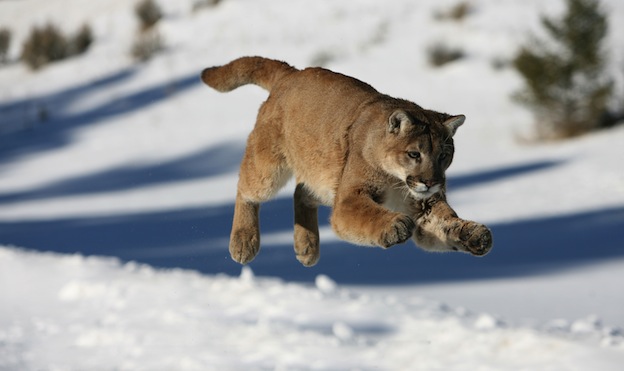 Typically the Cougar won’t consume remains that other animals have left behind. However, some studies in areas where there is very little food documents them eating remains of deer carcasses. This is a strong indicator of how the Cougar will continue to adapt to changes in the environment in order for them to be able to survive.

Many people don’t realize it but the Cougar’s diet also consists of rodents and insects. They are going to take the opportunity to feed on anything they can get in order to survive. There are times in the year when these forms of food may be all they are able to live on for several days at a time.

The average adult Cougar can easily consume up to 10 pounds of meat every single day. For a human that would be the equivalent of eating 40 regular sized hamburgers. When there isn’t enough food to go around the population of the Cougar in the wild can drop dramatically. Young males may try to take on larger ones that have established territories so that they have a chance of survival.