When you hear terms including Cougar, Mountain Lion, and Puma you are talking about the same thing. In the English language there is more than 40 words for the Cougar. There is so much to learn about these animals so if you want to get the facts you have come to the right place!

These animals can look different in size though based on their region of habitat. They are often confused with wild dogs and wolves.

The Cougar has the widest habitat area of any of the wild cats out there.

Of the large cats, only the Jaguar is larger than the Cougar.

The Cougar is an amazing predator. They consume meat include mule deer and elk in their natural environment. They are also known to take down horses, cows, and sheep that are offered on ranches due to the boundaries from these animals and the humans. They also eat rodents and insects.

While most wild cats are territorial, the Cougar is one that is very territorial and will fight for the space that they want to be able to use for finding food. The can have a home range of 400 square miles.

The Cougar has been known to attack humans, and recorded incidents are up in recent years. Almost all of the attacks do result in death due to the fact that they grab around the neck and head.

The Cougar is the most active in the early morning, night and at dusk. They tend to rest during the day to stay out of the heat and to conserve energy.

The tail of a Cougar can be about 33 inches long. It helps to keep them balanced.

The state of Wyoming in the United States had a huge increase in the population of cougars between the mid 1960s and the early 1990s.

It is believed that the Cougar originated in Asia about 11 million years ago.

There are 6 subspecies of the Cougar. All but 1 of them lives in Latin America.

The Cougar is genetically closely related to the Cheetah.

Cougars that live very close to poles are the largest. They can weigh up to 220 pounds. The closer they are to the equator though the smaller they become. The smallest weigh about 115 pounds.

The Cougar isn’t able to roar.

Many people mistake the Cougar as one of the big cats but it is too small to fit this classification. 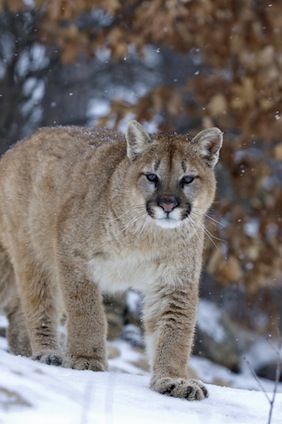 Life expectancy in the wild for the Cougar is from 10 to 13 years. In captivity they may be able to live up to 20 years. The oldest living Cougar in captivity was just a few months short of turning 30 when he died in 2007.

Approximately 50,000 Cougars remain in the wild today. It is very hard to get an accurate count of them though due to the fact that they are so dispersed and well hidden in their habitats.

There is a hybrid which is part Cougar and part Leopard known as the Pumapard. These animals have a type of dwarfism among them regardless of how you mix and match the sexes of the parents. They have occasionally been mated in controlled settings but not known to exist in the wild.

Of all of the felines out there the Cougar is considered to be the one at the least risk of becoming endangered.

It may surprise you to learn that the Cougar is also known to live in swamplands and deserts.

They can easily eat up to 12 pounds of meat per day when they are adults.