The Cougar is the second heaviest wild cat in the American Continent only after the Jaguar. The look of it is one that is very intriguing. This is a well designed animal that is able to conserve energy and to make the best of the environment it has available. It is often confused in the wild with other cats but you can tell from its body overall that it is a Cougar. They don’t belong to the big cats.

They have fur that is light tan or brown. They also have a tail that is very long and it helps to offer them balance. It can end up being about 8 feet in length from the nose to the tail. The tip of the tail is black. The fact that they can move very fast makes that tail essential. Without it they wouldn’t have the balance for agility and graceful movements.

They can vary significantly in weight from 115 pounds to 265 pounds depending on where they live. The Cougar has a long body that is very lean. They typically are from 2 up to 2 ½ feet tall. The males are a bit taller and heavier than the females. These animals have very small heads and rounded ears. Their small heads often seem out of place with the huge dimensions of their shoulders.

The body of the Cougar is extremely powerful and they are very fast. The size of them often means they are underestimated both by other animals and by humans. Yet they have lots of power in the legs and the shoulders. They also have amazing amounts of strength in their jaws. They use them to take down prey and to hold it until the life has drained out of it. They also have canine teeth that are strong and pointed at the ends.

The strength of the Cougar also helps it to be able to protect food sources. The opportunity for a large kill is one that they are able to complete often. However, they can’t consume all of the meat at once. Using their jaws and teeth they will drag it to a location where they can hide it. Then they can return over the next several days to feed from it. They also use their claws to dig areas to place parts of their kill. 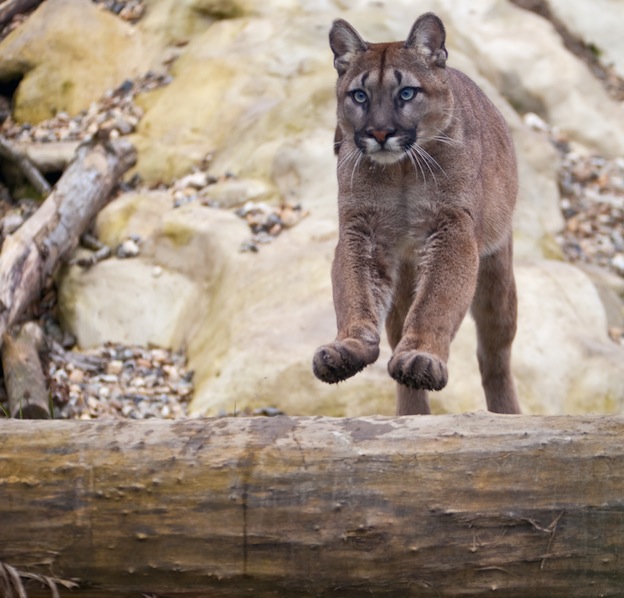 They can use their front paws to clutch prey as well. The front paws are considerably larger than the back ones. The Cougar features retractable claws. Their feet are extremely powerful! They can jump the distance of 18 feet in the air and 45 feet forward. This is an amazing feat and one that continues to put experts to the test about how their bodies allow them to do so.

The Cougar is one of the fastest animals found in North America. They have a running speed of up to 50 miles per hour in the wild. Part of their speed comes from their powerful legs. The anatomy of the Cougar also allows it to be very good at swimming. In some areas this animal lives in the swamplands. It is able to use the swimming ability to get prey when it is coming to the water areas for a drink.

The anatomy of the Cougar is one that works very well for them. It has allowed them to be able to thrive in a variety of different locations. The fact that so many people are impressed and fascinated by them can lead to trouble. They are dangerous animals though and so they always need to be something you keep your distance from.