The fact that the Cheetah reproduces at a very slow rate is a huge concern. Studies show that the males often suffer from a low production of sperm. This means even when they do mate there isn’t always a high chance of young being created. In captivity the rate or reproduction is also very low. There are breeding programs but they don’t seem to be helping as much as we had hoped.

Another factor that experts worry about is that the Cheetah has a genetic make up that is very similar. There isn’t much variety at all when it comes to the genes that they can pass along to their offspring. When you factor in that there are less and less of them remaining in the wild they are becoming closer and closer related to each other. As a result of this serious defects and other issues are becoming more common among the population that remains. 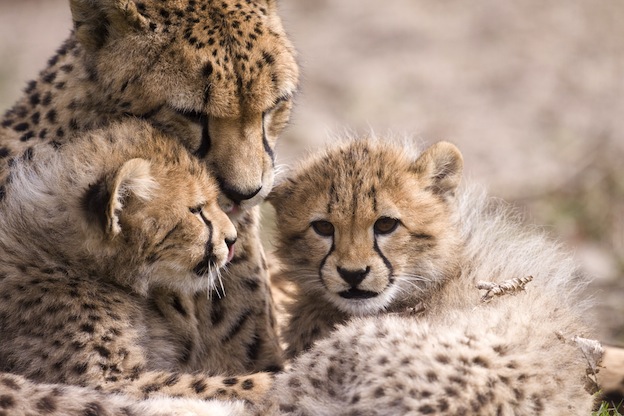 The male Cheetah is ready to mate when they are about 1 year old. The females are 2 years of age when they are ready to do so. It is possible for them to take part in the mating process any time of the year. Those periods though where there is more food for them is when most of the mating does occur though.

The males can be very aggressive towards each other for the chance to mate with females. It has been noted that the females can mate with several different males in the span of a couple of days. This also means that the offspring she has can have different fathers even though they are part of the same litter.

A female will carry the babies in her body for a period of 90 to 100 days. She can give birth to a single cub or to as many as 9 of them. They will weigh less than 1 kg each and are very vulnerable at birth. Approximately 90% of the young will die within the first few weeks of life. This is often due to the various predators that are out there.

The mother will feed the young milk from her body. When they are a few months of age they will start to learn about hunting. She is very diligent in her care for them. However, it can be hard to protect them and to go out and find food for them. When she has to go hunt she will hide them in the brush in the hopes that their bodies will camouflage them from predators until she can get back to them. As the cubs get older though there is less of a chance that they will become a meal for predators. 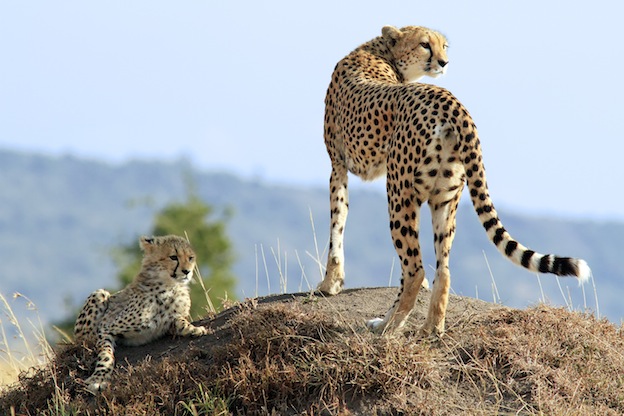 A mother and cheetah cub on the Maasai Mara National Reserve

This is often done through rough housing and play with each other. They will have to be able to get strong and to develop skills in order to live on their own. When food is scarce the young cubs will have to fight over it. Sadly, the larger and stronger cubs will get more food. The others will die and that is how survival of the fittest works in the natural world of the Cheetah.

When the young are about 1 year old to 1 ½ years of age the mother will leave them alone. These siblings will stay with each other for about 6 more months. Then the females will go off to find their own place. The males will continue to stay close to each other for their entire lives. If there is only one or two males in a litter they may join other males.