The Cheetah is an excellent hunter due to the combination of speed and powerful jaws. They use their eyes to find their prey rather than relying upon their sense of smell. They can see animal movement from a very far distance and then plan to carefully move in for the attack.

The females are going to be hunting alone. The exception is if they have older cubs that are along to be trained for the process so that they can take care of themselves in the future. The males hunt in groups of two up to six.

A very important role of the female is to teach her young how to successfully hunt. When they are about six weeks of age they will accompany her for hunts. She will do the killing and take down the prey. Then the young will come to feed with her too.

She will capture live prey and then let the young cubs practice killing it. This is a very important skill that they must learn. They have to be able to do it when she leaves them which is about 1 or 1 ½ years of age. If they can’t successfully hunt then they won’t be able to survive.

Most of the time the Cheetah is going to look for the most vulnerable when it comes to their prey. They will take down the young that have moved from the protective reach of their mothers. They will also feed on the sick or the older animals that aren’t’ able to move fast enough to get out of their grasp.

The food sources they take down can be up to 85 pounds in size. This includes the gazelle, zebra, and wildebeest. Sometimes birds and rabbits will be hunted when the larger prey is more difficult to find. They take down the kill by running very fast and tripping it.

As the prey falls the Cheetah will sink its sharp teeth into the neck and kill it almost instantly. The Cheetah will consume as much of the kill as it can right then and there. The goal is to eat plenty of it before it is chased off by other predators. The Cheetah can consume very large amounts of meat when it is readily available for them.

They aren’t going to try to take on all of the prey that they see. The Cheetah is well aware that its own survival is the fact that it is fast. Should it become injured then it could starve to death. If they aren’t able to successfully capture prey within a minute of a chase they will give up. They have about a 50% success rate. 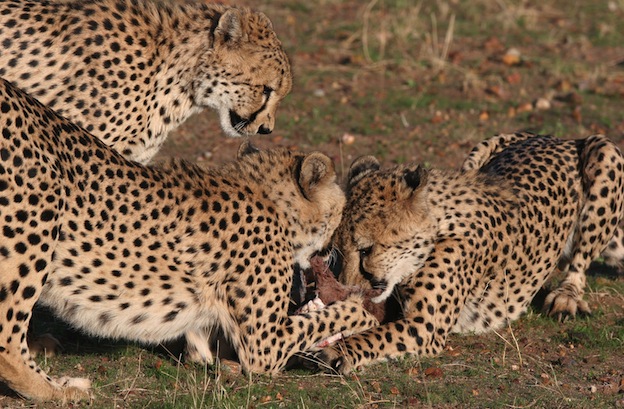 They are clean when it comes to their eating. They won’t consume the fur, the bones, or the bones of the animals that they kill.

Should any animals including the Hyena come to where the Cheetah is feeding they will abandon the food source. They very rarely will engage in any type of fighting. They know that their survival depends on their ability to be fast.

It can often be feast or famine for the Cheetah. Sometimes they will find food daily and other times it is a long stretch between feedings. That is why they never pass up a chance to get prey when they are able to do so. They will eat as much as they can. That extra food can be stored on the body. They may need to live on the fat reserves until they kill again.