The Cheetah is a medium sized animal, much smaller than most felines. It is deemed as one that is very fast and very graceful. Many people are in awe of it due to the power it has. It is often confused with the Leopard though which can make it confusing. However, there are quite a few differences for telling them from each other.

The full grown adult males can weigh about 150 pounds and be approximately 55 inches long. The females are a bit smaller but due to the fact that they do look very similar they are often mistaken for each other. The size of a Cheetah also depends on the location where it is living and the foods it is consuming. 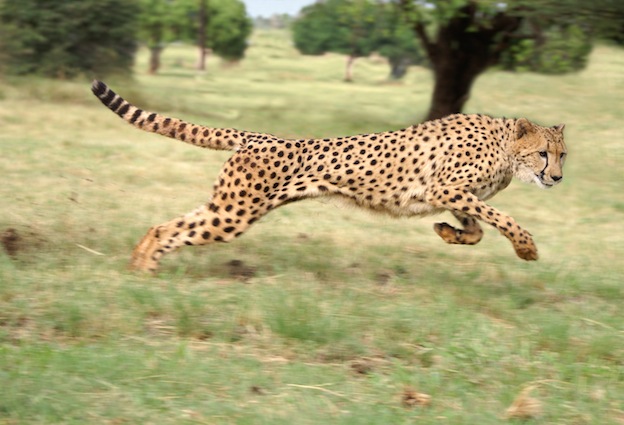 Cheetah, the fastest land animal in the world

The rosettes of black spots on the body of this animal is where the name comes from. In the Hindi language the word Cheetah means spotted one. The body is a tan color with the black spots in it. The belly, tip of the tail, and throat areas are a white color.

The tail of a Cheetah can be about 32 inches long. It has rings of black on it towards the top and then ends in a tuff of white. This very long tail helps to keep this animal balanced. They can often change directions quickly and this is a key way to ensure they are able to do so without stopping. The rings on the tail of a Cheetah are a way to identify it from the very similar Leopard.

The claws of this animal are very sharp and they use them for fighting. They also use them to tear open food that they are going to eat. These claws are semi-retractable. They have great vision and use it to find their prey. They have tear stripes around the eyes that protect them from sun glare.

The teeth of the Cheetah are sharp but they are smaller than those of other felines.

The waist is also very narrow and this helps with the speed of this animal. It also has very large nasal passages. This enables the Cheetah to be able to take in large amounts of air while it is running at top speeds.

When you take a close look at the various aspects of the Cheetah anatomy you will notice many things. The chest is very deep in the body and that allows it to take in a great deal of air at once. This is why it is able to run so quickly for long periods of time without becoming tired out. 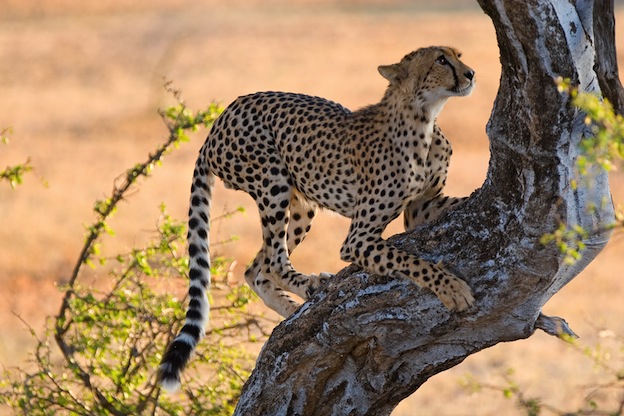 A young cheetah climbing a tree

The spine offers a great deal of benefit to the Cheetah. Have you ever wondered how they can move so fast yet still look so graceful? It has to do with the fact that their spine works like a spring mechanism. This helps them to get more power from their back legs with each burst of movement. It also helps them to conserve energy.

The bottom of the feet offer the Cheetah traction. There are special pads there so that when there are muddy areas from the rains they don’t slip and slide. This gives them a huge advantage over their prey that is going in all directions due to no traction.

This is one creature that has been well designed for survival in the wild. In fact many experts believe that if it weren’t for the actions of humans they would be thriving in the wild today.